What do Coldplay, Oasis, Robbie Williams, The Darkness, and Princess Diana have in common?
They are all big fans of a-ha.

Tickets on sale from www.breakoutevents.co.za

The excitement is at an all-time high for fans as a-ha arrive in SA next week as part of their global ‘a-ha play Hunting High And Low live’ tour. Tickets are selling fast so gets yours now to see them live in Cape Town on 14 February at the Green Point A Track and Johannesburg on 15 February at Marks Park, Emmarentia. 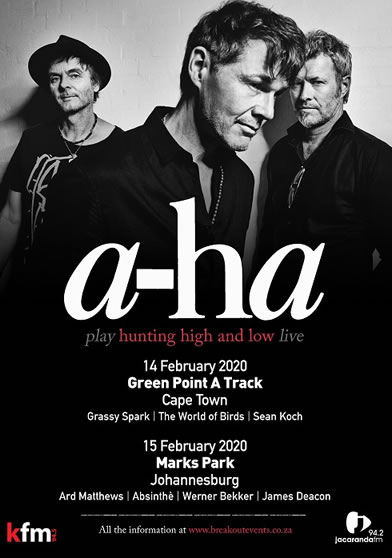 a-ha fans know this legendary trio very well, so facts such as “a-ha is Morten Harket, Magne Furuholmen and Paul Waaktaar-Savoy” and “a-ha’s debut album ‘Hunting High And Low’ sold 11 million copies worldwide” is not new info. There are some facts that could be a surprise, so get a closer look into who a-ha are and learn more about their music and the talented musicians who make up the trio.

25 THINGS YOU NEVER KNEW ABOUT A-HA

1. Guy Berryman of Coldplay took the photographs for the album cover of ‘Foot Of The Mountain’
2. In 2006 a-ha were honoured with the Q Magazine Inspiration Award, previously won by artists including U2, Joe Strummer, The Cure, New Order and David Bowie.
3. A set of triplets born in the UK in the mid 80’s were given the names Morten, Paul & Mags
4. a-ha have the Guinness World Record for the largest paying audience: 196,000 in the Maracana football stadium, Rio De Janeiro, 1992. (George Michael, Prince and Guns N’ Roses managed to gather only sixty thousand each).
5. Magne is a famous artist whose paintings were used for the Norwegian stamps and his artwork is on display at the Paul Stolper gallery in London, alongside works by artists like Damien Hirst and Sir Peter Blake.
6. a-ha still own a sizeable part of the Amazon rainforest as part of a 1980’s reforestation/preservation scheme
7. Oasis played a concert in Oslo, dedicating their song “Rock’n’Roll Star” to a-ha. In an interview with newspaper “VG”, Liam Gallagher confesses he was an a-ha fan years ago and that they are “f***ing amazing”.
8. Noel Gallagher’s favourite a-ha single is “Train Of Thought”
9. a-ha were invited to Michael Jackson’s Neverland in 1985, but turned down the invitation
10. a-ha imported the first electric car to Norway all of 25 years ago, and through repeated acts of civil disobedience they managed to obtain rights to free parking and no tolls for all electric cars in Norway.
11. a-ha have won 8 MTV video awards, the same number of awards won by Eminem, Green Day and music video pioneer Michael Jackson.
12. Robbie Williams is another artist to cover a-ha.Eloquently expressing his appreciation of the band “a-ha…they’re fucking great” he performed an acoustic version of ‘Hunting High And Low’ onstage in November 2003
13. Magne is the only member of a-ha who has ever been arrested in the UK
14. In high school, Paul barely graduated due to poor attendance which led his teachers to nickname him ‘The Guest’.
15. During the latest Coldplay concert in Oslo, Magne and Chris Martin did an unplugged version of the a-ha classic ‘Hunting High And Low’.
16. “a-ha on the net” in 2001 from Valhall in Oslo, Norway, was the 3rd most viewed webcast concert ever as 3.6 million hits were recorded, 500,000 with an average viewing time of 28 minutes. The average viewing time was the longest for a webcast concert. Only webcasts by Madonna and Paul McCartney recorded more hits.
17. Magne is left-handed and has broken his left arm three places – in three different skiing accidents.
18. Justin Hawkins of The Darkness holds Morten as one of his greatest vocal influences
19. Morrissey, at the Quart Festival in 2004, introduced himself as Morten Harket, and opened the concert with a few improvised bars from ‘The Sun Always Shines On TV’.
20. Magne once worked as a barman at the Churchill Arms in Kensington for £1 an hour
21. a-ha’s music video for the song, ‘I Wish I Cared’ was the first fully web-based animated flash music video to be made available back in 2000.
22. a-ha performed ‘Let it Be’ with Paul McCartney at the Nobel Peace Concert in 2001
23. Magne shares a birthday with porn baron Larry Flynt.
24. Keane think ‘Take On Me’ is quite possibly the best pure pop single of all time
25. Princess Diana was a big a-ha fan

Are you the ultimate a-ha fan who already knew a bunch of these facts or have your learnt even more about your favourite band?

There’s just a few days to go until a-ha take to the stage and perform some of their biggest hits from over the decades – ‘Take On Me’, ‘The Sun Always Shines On TV’, ‘Crying In The Rain’, ‘Stay On These Roads’, and many more!

Get your tickets now!

Get your tickets now before they sell out!