There’s nothing better than discovering new artists and new music. Today kicks off with a find like no other as Amber Fieldgate releases her debut single ‘Borders’ across all digital platforms.

Amber Fieldgate is a young, slick, up and coming singer/songwriter with vast potential. Despite appearing cool and collected at first glance, her enthusiasm and excitement can be felt bubbling under the surface. The South African native is anything but predictable. A Masters student in Scotland by day, she is always on the search for her next adventure or opportunity, “I like to challenge myself and see how far I can push things.” Not allowing herself to be confined by genre, Amber believes in combining different sounds to create something new, fresh and a bit strange. “I’ve always been a bit of an oddball and finding my feet while growing up was a challenge, but I’ve made it this far and I’m not stopping now.”

‘Borders’ is a beautifully eerie, yet captivating single that showcases the strength in Amber’s vocals and song writing.

A very personal release for her, Amber is extremely excited about the release of her debut single. “‘Borders’ is a little of piece of my soul and I’m so glad it is finally releasing as my debut single. This is the first project that I have ever had complete creative control over. I wrote the lyrics, oversaw the production and all the cover art.  I have spent so many years being told what to sing, what to write, how to act, how to look and who I have to be in order to be a musician. This track was so much fun to create and I am so proud to put my name on it!”

‘Amber Fieldgate – Borders’ is out now across all digital platforms 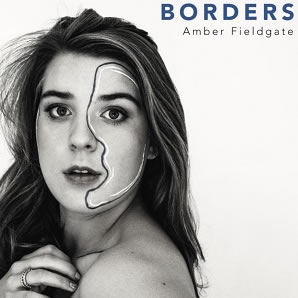 With Amber’s heart in a song and the world finally getting to hear her voice and sound, she speaks about the inspiration behind ‘Borders’ and how she wrote the song as a means of dealing with all the changes and what she was going through in early 2020. “I started writing ‘Borders’ during lockdown when the Coronavirus was at its peak in South Africa. I was also getting ready to move to a new country. It was such a bizarre time for me, it almost felt like I was living in a parallel universe or someone else’s life. The song tells a story about being in unfamiliar territory and grappling with change and isolation which is exactly what I was experiencing.”

In the midst of a pandemic and planning a move to Scotland for studies, the song needed to be recorded before the big move abroad and Amber found the perfect producer with Tjaart van der Walt, who has created hits for the likes of Graeme Watkins, Daniel Baron, Zinah, and many more. “I wanted something dramatic, bold and a little eerie and Tjaart was completely on the same page as me. Even the smallest things like the choice of layering instruments or adding in some quirky sounds just made the song what it is. He was so helpful and really listened to my vision and just made the song better and better every time we worked on it. We just really complimented each other and created something we both love.”

Settled in Edinburgh, Scotland and finally releasing her debut single, Amber reflects on what the journey has been like in 2020 and what still awaits, saying “The rest of this year I’ll be in my first year of a double Master’s in Counselling Psychology at the University of Edinburgh in Scotland. I will probably be spending a lot of time studying and working towards that. I will also be writing in between and hopefully going back to South Africa early next year to work on new music. The pandemic has really made me view things differently. Everything was put on hold and it gave me some time to reflect and understand that I need to make music for myself, not for labels or the charts or anything like that. I know it sounds like a common thought, but I used to be so hung up on what others wanted that I forgot who I was and what my music was. The pandemic was very challenging but it came with a lot of personal growth.”

Determined and excited for the future, and releasing music that will have her standing bravely in a class of her own, Amber Fieldgate is one to watch.