Vulvodynia, the South African brutal death metal machine has unleashed the video for their track Nyaope which features a guest appearance from Martin Matoušek of Gutalax. The track which is taken from their latest album Mob Justice out now on Lacerated Enemy Records.

The band sent director Frans Borman into the cracks and crevices of Johannesburg to showcase the reality of poverty and drug abuse in South Africa.

“Desperate times call for desperate measures. But if you’re looking for a lifeline, Nyaope is not gonna make the cut. It saddens me deeply that low-income groups have to resort to an ugly cocktail drug that destroys bodies, lives, families and communities just to feel they can breathe. What reflection it is on us in higher-income groups? The weakest should be protected, nurtured, supported, understood and cared for. Let’s say you cut yourself or you have a headache, the whole body will focus on that hurt part until it’s better. I used random images of roadkill, desolation, deterioration, alienation, and larva crawling juxtaposed with real-life situations to show Nyaope is jarring. Nyaope is a nightmare. Nyaope is disrupting. Nyaope is a monster. Like the animal crossing the road to reach greener pastures and getting hit by an18-wheeler out of nowhere, Nyaope show no mercy.” Comments Frans.

The band will be kicking off their Australia and New Zealand Mob Justice album launch tour on Friday 8th November in Brisbane. This will be their first time over there, they’ll be supported in Australia by Wraith, To The Grave and Zeolite at all the shows and a selection of the finest bands the Australian heavy scene has to offer. Zeolite and Organectomy will be joining them in New Zealand.

“”It our first-time touring Australia and New Zealand. We are very excited to meet our fans and see how brutal the pits can be!”” Chris van der Walt, bassist. 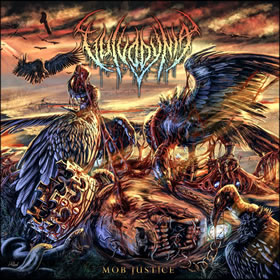 Mob Justice released on the 30th June 2019 on Lacerated Enemy Records and all digital platforms.
Order the album here